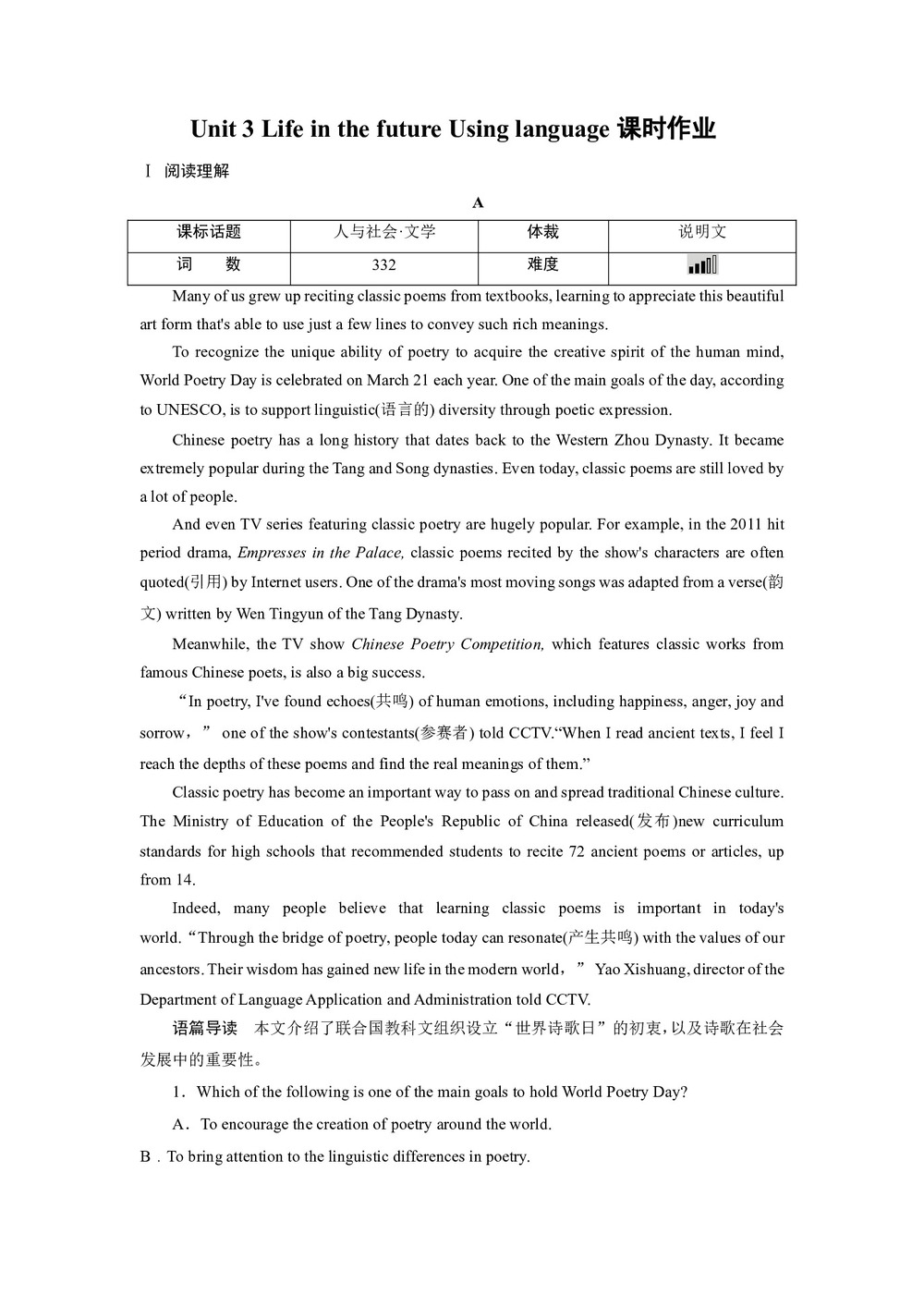 课标话题 人与社会·文学 体裁 说明文 词  数 332 难度   Many of us grew up reciting classic poems from textbooks, learning to appreciate this beautiful art form that's able to use just a few lines to convey such rich meanings.

To recognize the unique ability of poetry to acquire the creative spirit of the human mind, World Poetry Day is celebrated on March 21 each year. One of the main goals of the day, according to UNESCO, is to support linguistic(语言的) diversity through poetic expression.

Chinese poetry has a long history that dates back to the Western Zhou Dynasty. It became extremely popular during the Tang and Song dynasties. Even today, classic poems are still loved by a lot of people.

And even TV series featuring classic poetry are hugely popular. For example, in the 2011 hit period drama, Empresses in the Palace, classic poems recited by the show's characters are often quoted(引用) by Internet users. One of the drama's most moving songs was adapted from a verse(韵文) written by Wen Tingyun of the Tang Dynasty.

"In poetry, I've found echoes(共鸣) of human emotions, including happiness, anger, joy and sorrow，" one of the show's contestants(参赛者) told CCTV."When I read ancient texts, I feel I reach the depths of these poems and find the real meanings of them."

Classic poetry has become an important way to pass on and spread traditional Chinese culture. The Ministry of Education of the People's Republic of China released(发布)new curriculum standards for high schools that recommended students to recite 72 ancient poems or articles, up from 14.

Indeed, many people believe that learning classic poems is important in today's world."Through the bridge of poetry, people today can resonate(产生共鸣) with the values of our ancestors. Their wisdom has gained new life in the modern world，" Yao Xishuang, director of the Department of Language Application and Administration told CCTV.

1．Which of the following is one of the main goals to hold World Poetry Day?

A．To encourage the creation of poetry around the world.

B．To bring attention to the linguistic differences in poetry.