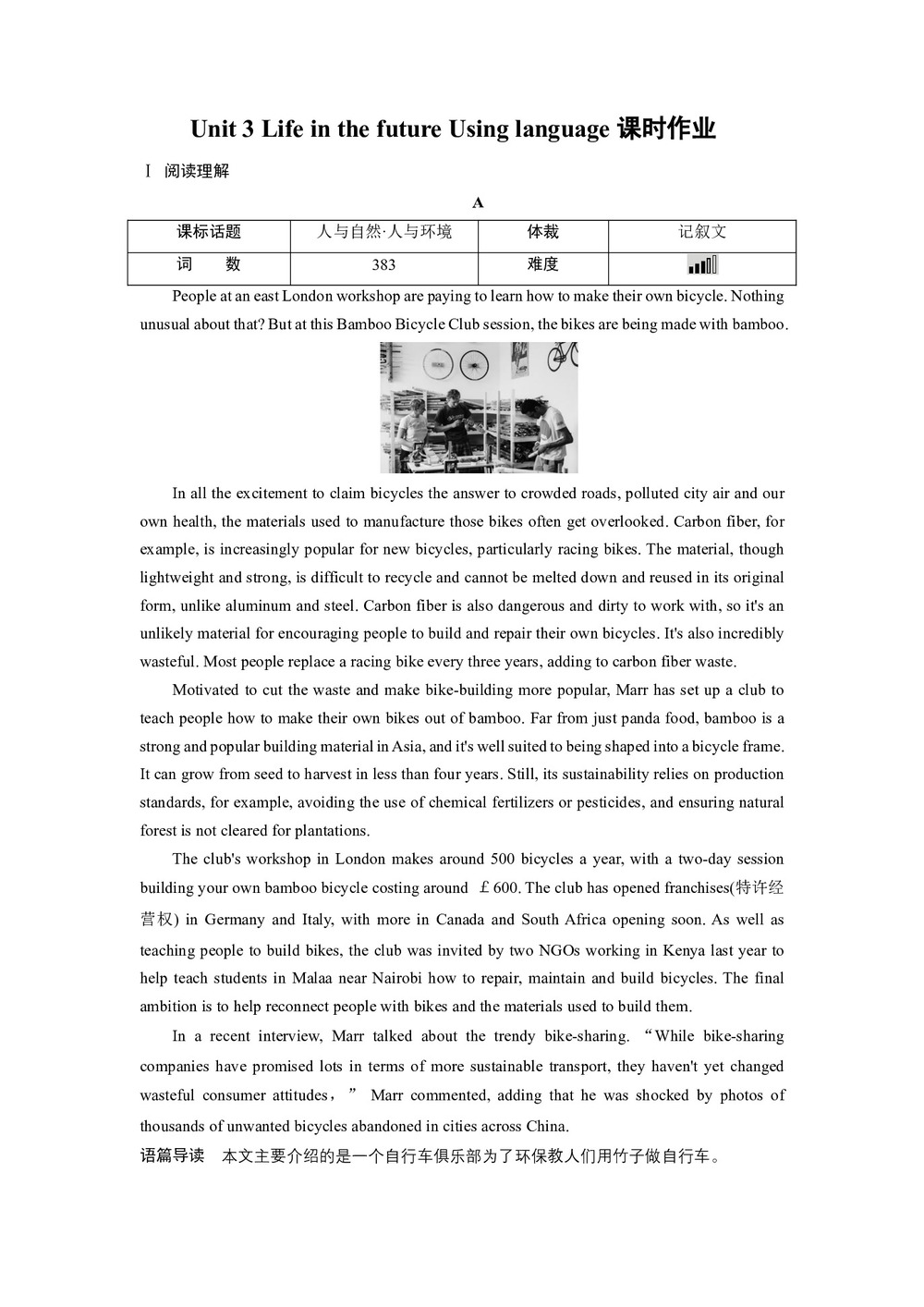 课标话题 人与自然·人与环境 体裁 记叙文 词  数 383 难度   People at an east London workshop are paying to learn how to make their own bicycle. Nothing unusual about that? But at this Bamboo Bicycle Club session, the bikes are being made with bamboo.

In all the excitement to claim bicycles the answer to crowded roads, polluted city air and our own health, the materials used to manufacture those bikes often get overlooked. Carbon fiber, for example, is increasingly popular for new bicycles, particularly racing bikes. The material, though lightweight and strong, is difficult to recycle and cannot be melted down and reused in its original form, unlike aluminum and steel. Carbon fiber is also dangerous and dirty to work with, so it's an unlikely material for encouraging people to build and repair their own bicycles. It's also incredibly wasteful. Most people replace a racing bike every three years, adding to carbon fiber waste.

Motivated to cut the waste and make bike­building more popular, Marr has set up a club to teach people how to make their own bikes out of bamboo. Far from just panda food, bamboo is a strong and popular building material in Asia, and it's well suited to being shaped into a bicycle frame. It can grow from seed to harvest in less than four years. Still, its sustainability relies on production standards, for example, avoiding the use of chemical fertilizers or pesticides, and ensuring natural forest is not cleared for plantations.

The club's workshop in London makes around 500 bicycles a year, with a two­day session building your own bamboo bicycle costing around ￡600. The club has opened franchises(特许经营权) in Germany and Italy, with more in Canada and South Africa opening soon. As well as teaching people to build bikes, the club was invited by two NGOs working in Kenya last year to help teach students in Malaa near Nairobi how to repair, maintain and build bicycles. The final ambition is to help reconnect people with bikes and the materials used to build them.

In a recent interview, Marr talked about the trendy bike­sharing. "While bike­sharing companies have promised lots in terms of more sustainable transport, they haven't yet changed wasteful consumer attitudes，" Marr commented, adding that he was shocked by photos of thousands of unwanted bicycles abandoned in cities across China.