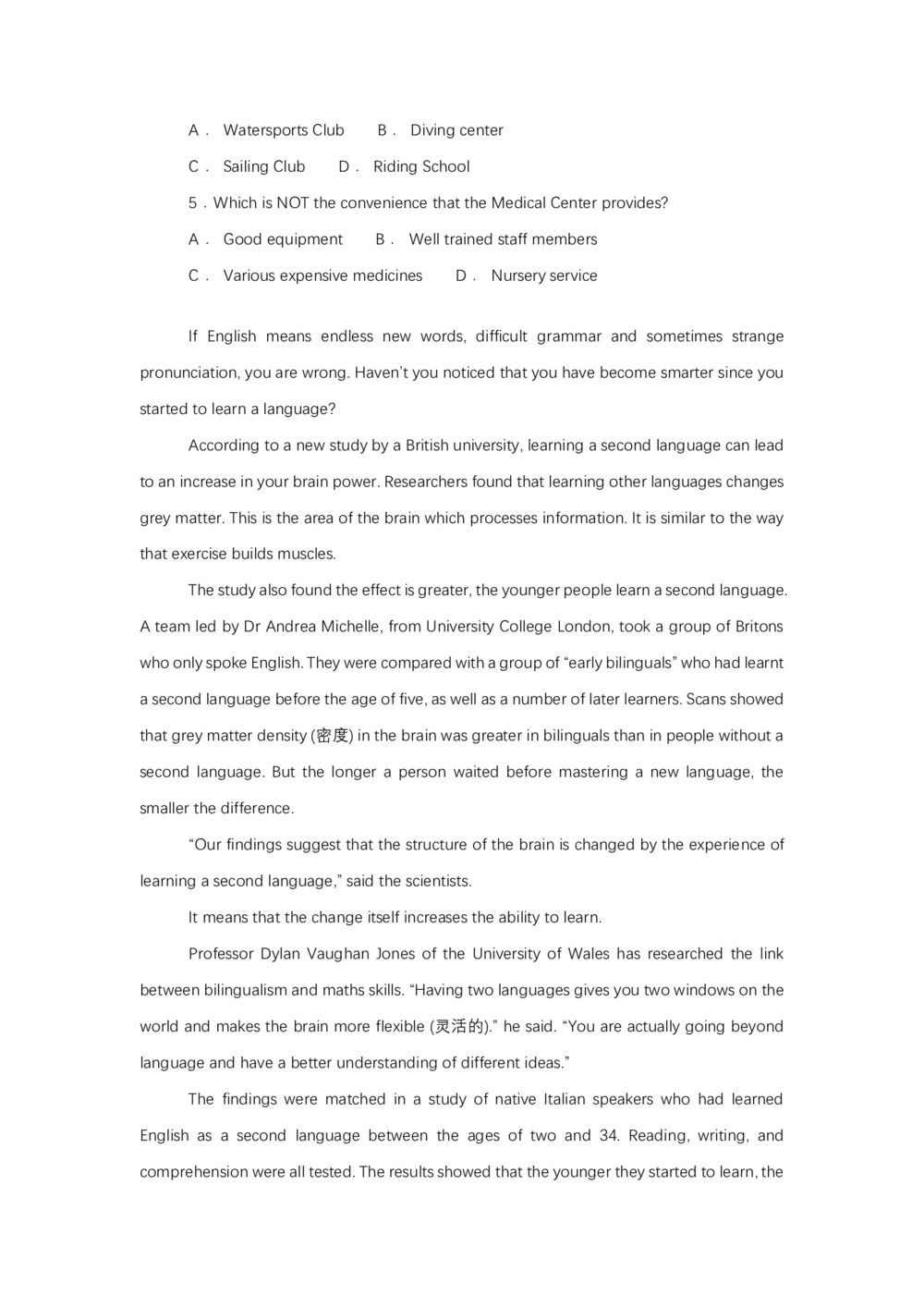 ﻿   A． Watersports Club B． Diving center

5．Which is NOT the convenience that the Medical Center provides?

If English means endless new words, difficult grammar and sometimes strange pronunciation, you are wrong. Haven't you noticed that you have become smarter since you started to learn a language?

According to a new study by a British university, learning a second language can lead to an increase in your brain power. Researchers found that learning other languages changes grey matter. This is the area of the brain which processes information. It is similar to the way that exercise builds muscles.

The study also found the effect is greater, the younger people learn a second language. A team led by Dr Andrea Michelle, from University College London, took a group of Britons who only spoke English. They were compared with a group of "early bilinguals" who had learnt a second language before the age of five, as well as a number of later learners. Scans showed that grey matter density (密度) in the brain was greater in bilinguals than in people without a second language. But the longer a person waited before mastering a new language, the smaller the difference.

"Our findings suggest that the structure of the brain is changed by the experience of learning a second language," said the scientists.

It means that the change itself increases the ability to learn.

Professor Dylan Vaughan Jones of the University of Wales has researched the link between bilingualism and maths skills. "Having two languages gives you two windows on the world and makes the brain more flexible (灵活的)." he said. "You are actually going beyond language and have a better understanding of different ideas."

The findings were matched in a study of native Italian speakers who had learned English as a second language between the ages of two and 34. Reading, writing, and comprehension were all tested. The results showed that the younger they started to learn, the better. "Studying a language means you get an entrance to another world," explained the scientists.

A． science on learning a second language

B． man's ability of learning a second language

7．In the second paragraph, the writer mentions "exercise" in order to ______.

A． say language is also a kind of physical labor

A． a researcher on language learning

B． a person who is good at learning foreign languages

C． a person who can speak two languages

A Spanish company has opened the first public napping space in Madrid. Siesta & Go promises the Spanish people a quiet and restful getaway in the city's business center.

Napping spaces are already nothing new places in other big cities in the world. But the idea would appear to work well with the culture of Spain, where people traditionally take a midday nap.

The Madrid nap bar recently opened with 19 beds. They can be rented by the minute or by the hour. People can choose either a private or shared room. An hour of napping time inside a private room costs about $ 15.

The company also offers areas to work, as well as armchairs, newspapers and coffee for those not wishing to sleep. Philip Marco is one happy customer. He says he gets tired during the day because he has a long drive to work. He says the midday nap is the perfect way to build up energy. "I come for about 30 minutes, something like that. Sleeping for 30 minutes usually is enough for me to be able to get through the evening."

Siesta & Go provides all bedding, clean nightshirts and other materials. Nappers can request to be woken up when their time is up.

While many Spanish people love their midday naps, others like Carlos Villarroja say they are just too busy to keep this tradition. "It's a Spanish tradition, but I think it's more of an impractical thing than a tradition. Because with the lifestyle we have the working hours, we have very little free time for a nap, in my case, at least during the week."