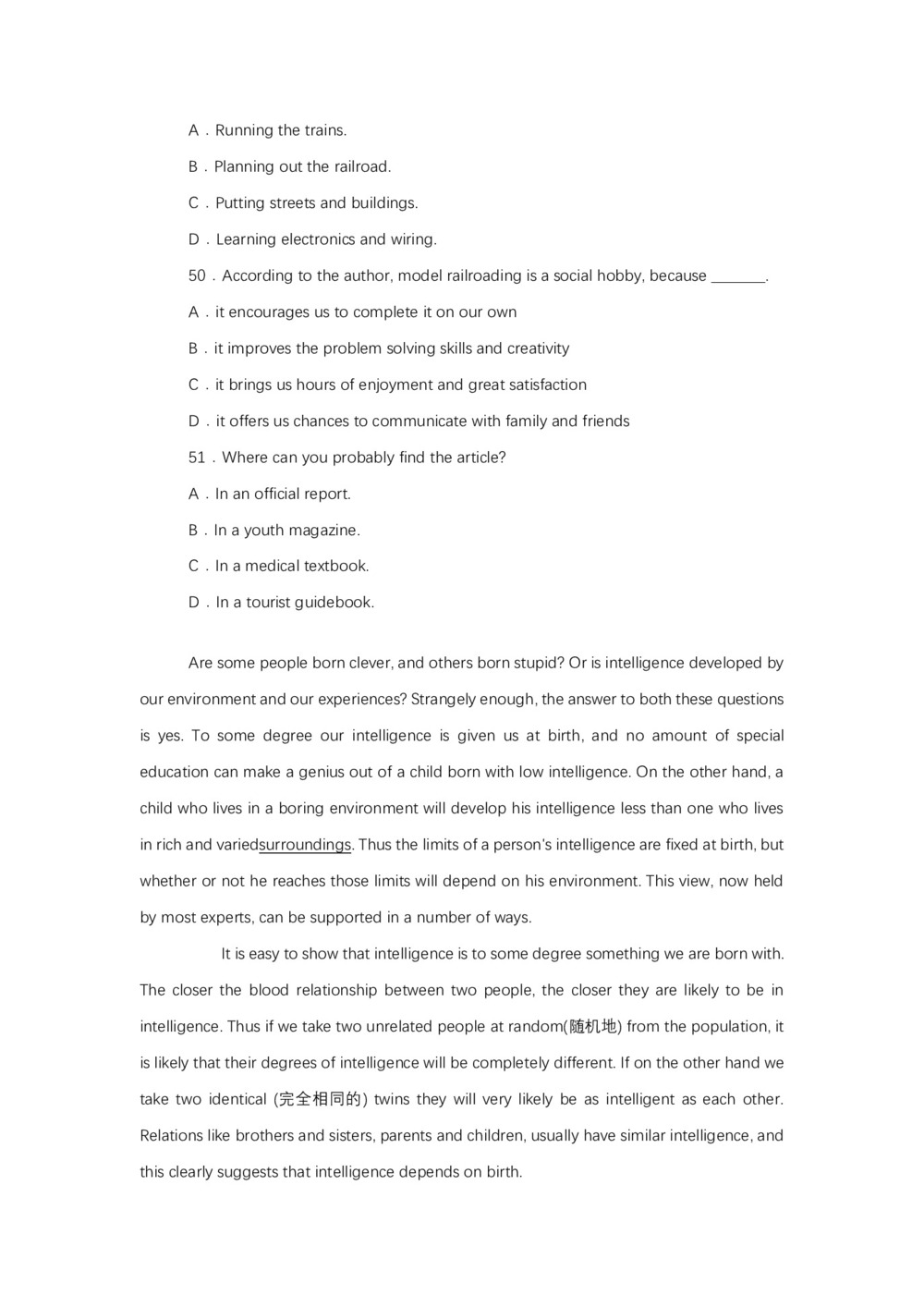 A．it encourages us to complete it on our own

C．it brings us hours of enjoyment and great satisfaction

D．it offers us chances to communicate with family and friends

51．Where can you probably find the article?

Are some people born clever, and others born stupid? Or is intelligence developed by our environment and our experiences? Strangely enough, the answer to both these questions is yes. To some degree our intelligence is given us at birth, and no amount of special education can make a genius out of a child born with low intelligence. On the other hand, a child who lives in a boring environment will develop his intelligence less than one who lives in rich and variedsurroundings. Thus the limits of a person's intelligence are fixed at birth, but whether or not he reaches those limits will depend on his environment. This view, now held by most experts, can be supported in a number of ways.

It is easy to show that intelligence is to some degree something we are born with. The closer the blood relationship between two people, the closer they are likely to be in intelligence. Thus if we take two unrelated people at random(随机地) from the population, it is likely that their degrees of intelligence will be completely different. If on the other hand we take two identical (完全相同的) twins they will very likely be as intelligent as each other. Relations like brothers and sisters, parents and children, usually have similar intelligence, and this clearly suggests that intelligence depends on birth.

Imagine now that we take two identical twins and put them in different environments. We might send one, for example, to a university and the other to a factory where the work is boring. We would soon find differences in intelligence developing, and this indicates that environment as well as birth plays a part. This conclusion is also suggested by the fact that people who live in close contact with each other, but who are not related at all, are likely to have similar degrees of intelligence.

52．Which of these sentences best describes the writer's point in Para. 1?

A．To some degree, intelligence is given at birth.

B．Intelligence is developed by the environment.

C．Some people are born clever and others born stupid.

D．Intelligence is fixed at birth, but is developed by the environment.

A．unrelated people are not likely to have different intelligence

C．the closer the blood relationship between people, the more different they are likely to be in intelligence

How to Beat the Procrastination Habit

I am a procrastinator (拖延症患者). I always have been. I've tried all sorts of things to beat the habit. Here are some techniques I've been using:

Set aside blocks of time to do things.

When I was talking with my wellness (健身) coach earlier this year, she asked me why I didn't exercise more often. " 56．," I said. "Something always comes up." She wasn't impressed. "J.D.," she said, "You have to make time. Make an appointment with yourself to run or to go for a bike ride." The same principle applies to other things you might procrastinate.

57．. Often I'll be sitting on the back porch reading a book, and it will occur to me that some chore needs to be done － mending the fence, for example. "58．," I tell myself. Wrong! What usually happens is that I forget to write it down, and even if I do, I just look at the list and procrastinate for weeks on end. The