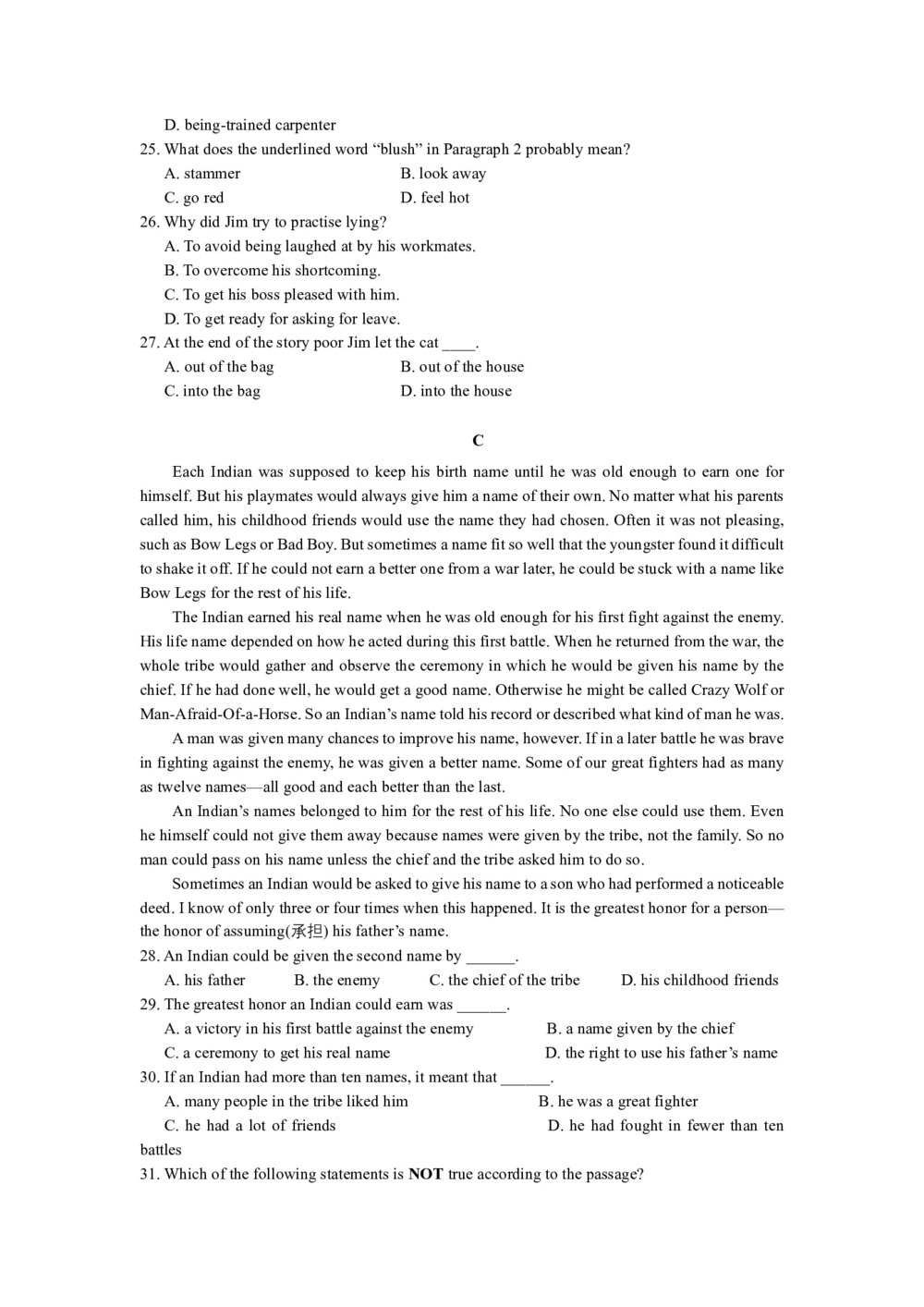 25. What does the underlined word "blush" in Paragraph 2 probably mean?

A. stammer B. look away

26. Why did Jim try to practise lying?

A. To avoid being laughed at by his workmates.

B. To overcome his shortcoming.

C. To get his boss pleased with him.

D. To get ready for asking for leave.

Each Indian was supposed to keep his birth name until he was old enough to earn one for himself. But his playmates would always give him a name of their own. No matter what his parents called him, his childhood friends would use the name they had chosen. Often it was not pleasing, such as Bow Legs or Bad Boy. But sometimes a name fit so well that the youngster found it difficult to shake it off. If he could not earn a better one from a war later, he could be stuck with a name like Bow Legs for the rest of his life.

The Indian earned his real name when he was old enough for his first fight against the enemy. His life name depended on how he acted during this first battle. When he returned from the war, the whole tribe would gather and observe the ceremony in which he would be given his name by the chief. If he had done well, he would get a good name. Otherwise he might be called Crazy Wolf or Man-Afraid-Of-a-Horse. So an Indian's name told his record or described what kind of man he was.

A man was given many chances to improve his name, however. If in a later battle he was brave in fighting against the enemy, he was given a better name. Some of our great fighters had as many as twelve names-all good and each better than the last.

An Indian's names belonged to him for the rest of his life. No one else could use them. Even he himself could not give them away because names were given by the tribe, not the family. So no man could pass on his name unless the chief and the tribe asked him to do so.

Sometimes an Indian would be asked to give his name to a son who had performed a noticeable deed. I know of only three or four times when this happened. It is the greatest honor for a person-the honor of assuming(承担) his father's name.

A. his father B. the enemy C. the chief of the tribe D. his childhood friends

A. a victory in his first battle against the enemy B. a name given by the chief

C. a ceremony to get his real name D. the right to use his father's name

A. many people in the tribe liked him B. he was a great fighter

C. he had a lot of friends D. he had fought in fewer than ten battles

31. Which of the following statements is NOT true according to the passage?

A. The names given by the playmates of an Indian were usually not pleasant.

B. The life name of an Indian was earned in battle.

C. An Indian could throw away his birth name when his playmates gave him one.

D. The Indians themselves were not allowed to give their names away.

Camels are well known for their ability to survive the hot and dry conditions of the desert，but a study suggests they once grew well in colder climates. Scientists have found fossilized（化石） parts of a leg bone belonging to a giant camel that lived in the forests of Canada's High Arctic about 3.5million years ago.

The research is published in the journal Nature Communication. Dr. Mike Buckley, an author of the paper from the university of Manchester, said, "What's special about this story is that this is the northernmost evidence of camels. "The area was warmer than today 3.5 million years ago, but the ancient giant camels would have had to face long and bitter winter, with temperatures below freezing. There would have been snowstorms and about six months of darkness.

While scientists have known for some time that camels existed in North America, with the earliest creatures dating to about 45 million years ago, they were astonished to find a species at such a latitude（纬度).

Over the course of three investigations, which began in 2006，researchers from the Canadian Museum of Nature collected 30 pieces of the leg bone from Ellesmere Island in Canada.

Their size suggested that the animal was about 30% larger than today's camels, measuring about 2.7m from foot to shoulder. Despite its size, the researchers believe it would have been similar in appearance, although it probably had a thicker coat to stay warm.

To investigate further, the team took the protein found in the bone from the fossils and modern animals. Dr. Buckley said, "The results tell us that it is a direct ancestor of modern camels. "

He said the findings provided a new insight into the evolution of this animal. "It suggests that many of the adaptations(适应) that we currently think of, in terms of camels being adapted to warm desert-like