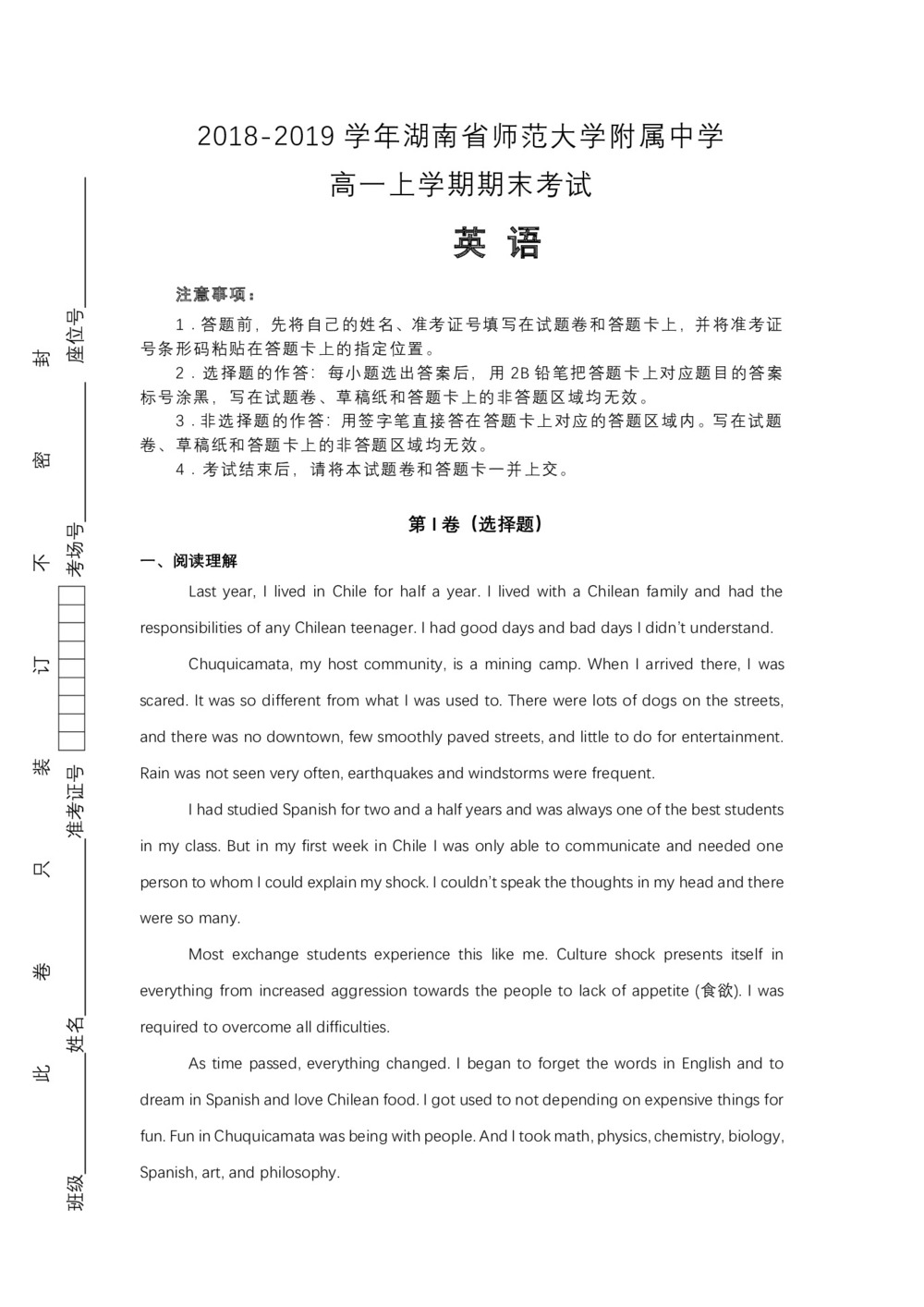 Last year, I lived in Chile for half a year. I lived with a Chilean family and had the responsibilities of any Chilean teenager. I had good days and bad days I didn't understand.

Chuquicamata, my host community, is a mining camp. When I arrived there, I was scared. It was so different from what I was used to. There were lots of dogs on the streets, and there was no downtown, few smoothly paved streets, and little to do for entertainment. Rain was not seen very often, earthquakes and windstorms were frequent.

I had studied Spanish for two and a half years and was always one of the best students in my class. But in my first week in Chile I was only able to communicate and needed one person to whom I could explain my shock. I couldn't speak the thoughts in my head and there were so many.

Most exchange students experience this like me. Culture shock presents itself in everything from increased aggression towards the people to lack of appetite (食欲). I was required to overcome all difficulties.

As time passed, everything changed. I began to forget the words in English and to dream in Spanish and love Chilean food. I got used to not depending on expensive things for fun. Fun in Chuquicamata was being with people. And I took math, physics, chemistry, biology, Spanish, art, and philosophy.

But the sacrifices were nothing compared to the gain. I learned how to accept and to succeed in another culture. I now have a deeper understanding of both myself and others.

1．The author came to Chile last year with the purpose of ____.

A．paying a visit to Chile as a tourist

B．experiencing Chilean life as a teacher

D．studying knowledge as an exchange student

2．On arriving in Chile, why did the author feel frightened?

A．Because he did not know how to get along with the local people.

B．Because it was full of dangers like earthquakes and windstorms.

C．Because the living conditions were worse than what he was used to.

D．Because it was not convenient for him to shop there.

B．had some friends to have a chat with

D．couldn't express his thoughts in English

4．What did the author most probably think of his life in Chile?

Started in 1636, Harvard University is the oldest of all the many colleges and universities in the United States. Yale, Princeton, Columbia and Dartmouth were opened soon after Harvard.

In the early years, these schools were much alike. Only young men went to colleges. All the students studied the same subjects, and everyone learned Latin, Greek and Hebrew. Little was known about science then, and one kind of school could teach everything that was known about the world. When the students graduated, most of them become ministers or teachers.

In 1782, Harvard started a medical school for young men who wanted to become doctors. Later, lawyers could receive their training in Harvard's law school. In 1825, besides Latin and Greek, Harvard began teaching modern languages, such as French and German. Soon it began teaching American history.

As knowledge increased, Harvard and other colleges began to teach many new subjects. Students were allowed to choose the subjects that interested them.