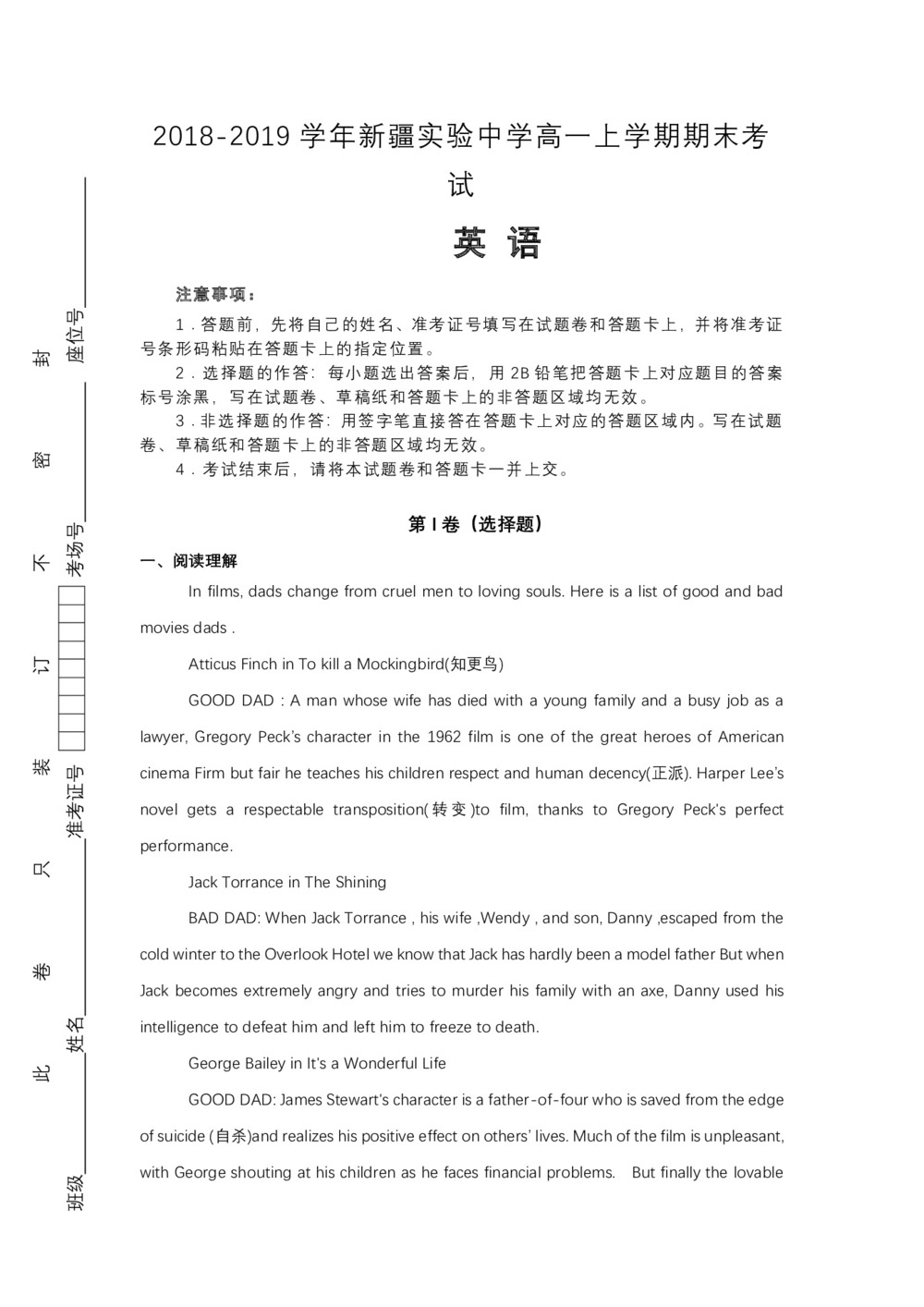 In films, dads change from cruel men to loving souls. Here is a list of good and bad movies dads .

Atticus Finch in To kill a Mockingbird(知更鸟)

GOOD DAD : A man whose wife has died with a young family and a busy job as a lawyer, Gregory Peck's character in the 1962 film is one of the great heroes of American cinema Firm but fair he teaches his children respect and human decency(正派). Harper Lee's novel gets a respectable transposition(转变)to film, thanks to Gregory Peck's perfect performance.

Jack Torrance in The Shining

BAD DAD: When Jack Torrance , his wife ,Wendy , and son, Danny ,escaped from the cold winter to the Overlook Hotel we know that Jack has hardly been a model father But when Jack becomes extremely angry and tries to murder his family with an axe, Danny used his intelligence to defeat him and left him to freeze to death.

George Bailey in It's a Wonderful Life

GOOD DAD: James Stewart's character is a father-of-four who is saved from the edge of suicide (自杀)and realizes his positive effect on others' lives. Much of the film is unpleasant, with George shouting at his children as he faces financial problems. But finally the lovable father realizes the worth of his own life, the value of friendship and the importance of being a loving dad.

BAD DAD: When the unfriendly cyborg(半机器人)told Luke Skywalker that he was his father ,the son's reaction says it all: "No! No!" It's hardly a joyful welcome to the family. For most of his son's life, Darth Vader has been an absent dad-and he has just cut off Luke's hand. You can understand why Father's Day cards might not be available.

1．Who is Harper Lee?

3．Which movie should you watch if you want to see a helpless father change?

4．What happened to Luke?

A．He lost his hand in an accident.

B．His father changed him into a cyborg.

C．He discovered that he had a cruel father.

D．His father lived with him for most of his life.

Last Saturday on the way to the mall, two children, a boy and a girl, came running towards me with bottles in their hands, asking if I wanted bottled water. It was a surprising gesture. I was wondering if they were doing fund-raising. I knelt and asked them where their parents were and how much a bottle of water cost. Then two adult women came up to me explaining what the children were doing. "We are teaching the children to give without anything in return. We are teaching people to accept without giving in return."

Two mothers had bought bottled water and placed a sticker on all bottles with five different quotes (引述):

1. Smile at everyone. You'll never know when someone may need it.

2. If Plan A does not work, there are 25 more letters in the alphabet.

3. Have a thirst for life. Every day is filled with possibilities.

4. In your thirst for knowledge, be sure you don't drown in all the information.

5. Dig your well before you're thirsty.

The bottle I have has quoted No.5. A sudden change of attitude opened up between me, the mothers and the children. We are no longer strangers to each other. We were having such a great time chatting and I ended up helping them give away the rest of the bottled water.