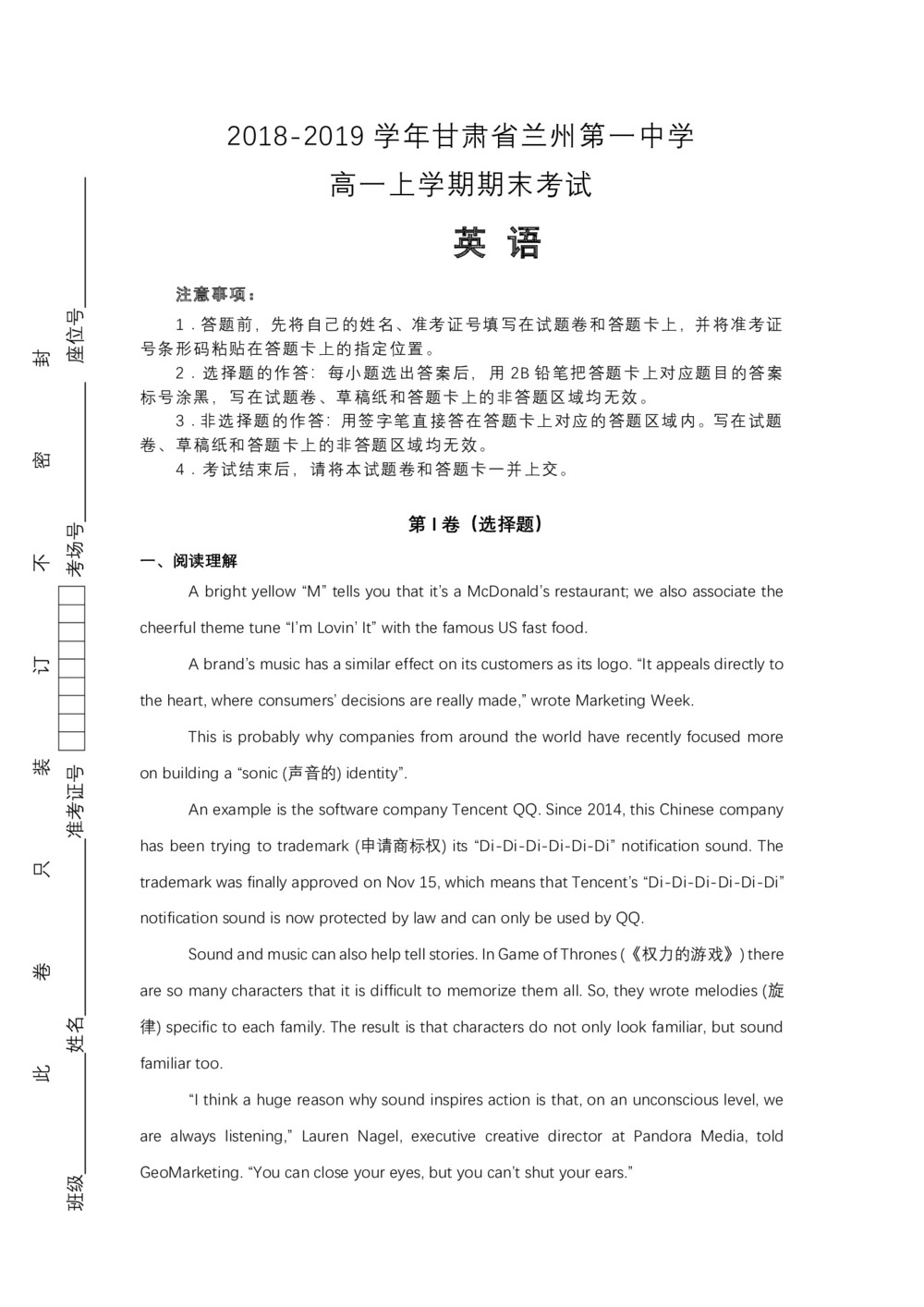 A bright yellow "M" tells you that it's a McDonald's restaurant; we also associate the cheerful theme tune "I'm Lovin' It" with the famous US fast food.

A brand's music has a similar effect on its customers as its logo. "It appeals directly to the heart, where consumers' decisions are really made," wrote Marketing Week.

This is probably why companies from around the world have recently focused more on building a "sonic (声音的) identity".

Sound and music can also help tell stories. In Game of Thrones (《权力的游戏》) there are so many characters that it is difficult to memorize them all. So, they wrote melodies (旋律) specific to each family. The result is that characters do not only look familiar, but sound familiar too.

"I think a huge reason why sound inspires action is that, on an unconscious level, we are always listening," Lauren Nagel, executive creative director at Pandora Media, told GeoMarketing. "You can close your eyes, but you can't shut your ears."

1．What is the influence of a brand's music, according to Marketing Week?

B．It helps to get customers' attention.

3．How does music help Game of Thrones?

B．It tells about the characters' personalities.

Perhaps no one knows the power of imagination better than Chinese writer Liu Cixin. Until four years ago, Liu worked full-time as a computer engineer at a power plant in Shanxi province. He only wrote science fiction in his spare time. But it was during this time that Liu's imagination took flight. He did what he might never have the chance to do in real life - wander in space, fight with aliens, and visit planets light-years away.

But even with such a powerful imagination, Liu, 55, probably hadn't expected that he would become the first Asian to win the Hugo Award, science fiction's highest prize, in 2015. Perhaps neither did he think that former US president Barack Obama would read his novel The Three-Body Problem, nor that on Nov 9 in Washington DC, he would win the 2018 Arthur C．Clarke Award for Imagination in Service to Society. It's the first time a Chinese writer has ever won the award.

"My mind opened up like never before. I felt like a narrow river finally seeing the sea," Liu said. "That night, in my eyes, the starry sky was completely different from the past. For the first time in my life, I was awed (使......敬畏) by the mystery of the universe."

But no matter how far away Liu's imagination takes him, somehow his novels always stay rational.

In The Three-Body Problem, for example, Liu tells a tale of aliens invading Earth. But unlike other alien stories, Liu talks more about relationships between civilizations(文明), rules of survival, and the