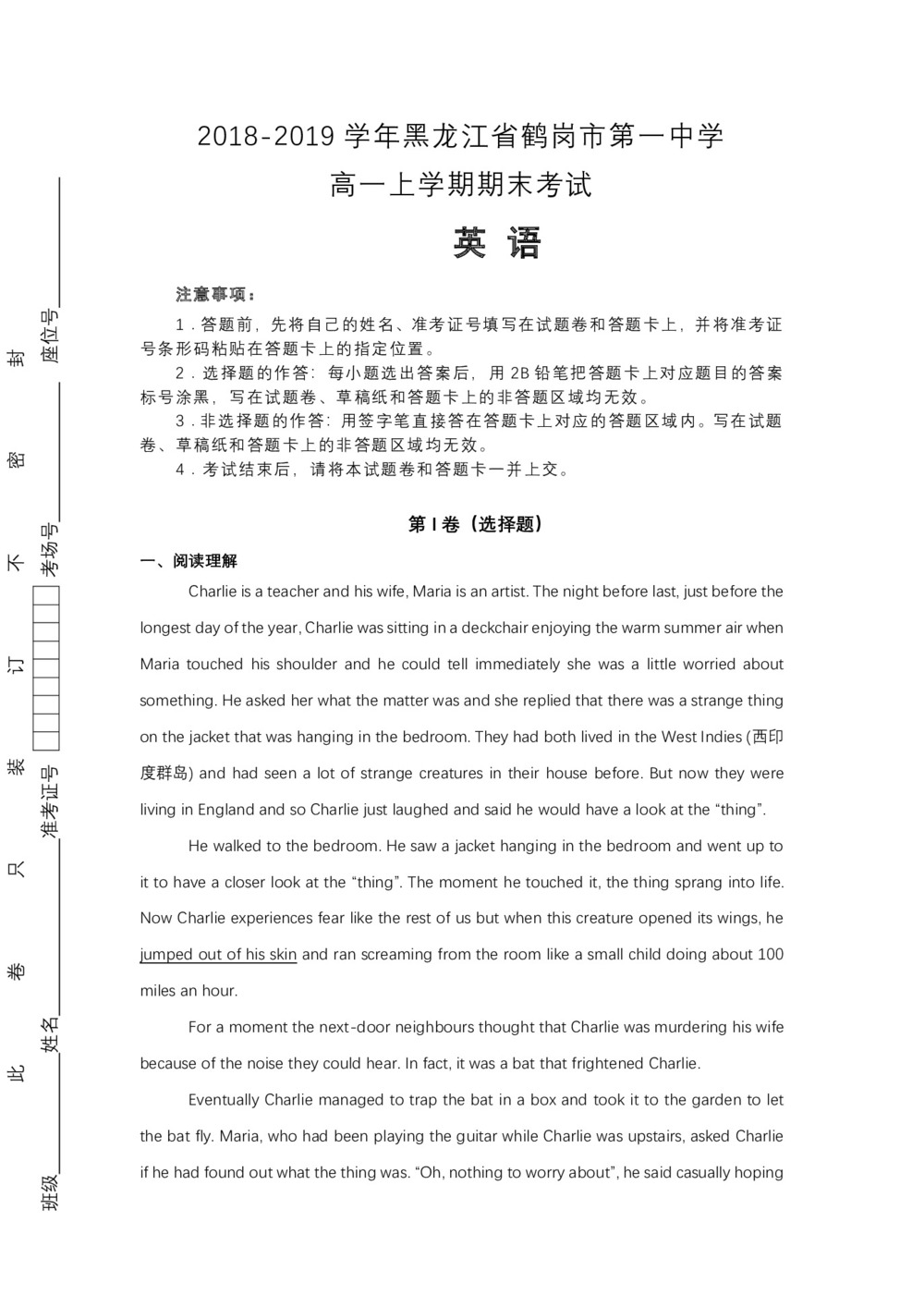 Charlie is a teacher and his wife, Maria is an artist. The night before last, just before the longest day of the year, Charlie was sitting in a deckchair enjoying the warm summer air when Maria touched his shoulder and he could tell immediately she was a little worried about something. He asked her what the matter was and she replied that there was a strange thing on the jacket that was hanging in the bedroom. They had both lived in the West Indies (西印度群岛) and had seen a lot of strange creatures in their house before. But now they were living in England and so Charlie just laughed and said he would have a look at the "thing".

He walked to the bedroom. He saw a jacket hanging in the bedroom and went up to it to have a closer look at the "thing". The moment he touched it, the thing sprang into life. Now Charlie experiences fear like the rest of us but when this creature opened its wings, he jumped out of his skin and ran screaming from the room like a small child doing about 100 miles an hour.

For a moment the next-door neighbours thought that Charlie was murdering his wife because of the noise they could hear. In fact, it was a bat that frightened Charlie.

Eventually Charlie managed to trap the bat in a box and took it to the garden to let the bat fly. Maria, who had been playing the guitar while Charlie was upstairs, asked Charlie if he had found out what the thing was. "Oh, nothing to worry about", he said casually hoping that the terror could not be seen in his eyes, "it was just a bat."

1．Why was Maria a little worried one night?

C．Because it was too hot for her. D．Because she had quarreled with her husband.

2．The underlined part "jumped out of his skin" in the second paragraph probably means ____.

3．What happened to the bat?

C．It was set free by Charlie. D．It was kept as a pet.

Teenagers who spend hours in front of the television may have a poorer diet as young adults.

A study，which included nearly 1，400 high school students，found those who watched TV for five hours or more per day had less healthy diets than peers(同龄人）five years later. Why does this happen? Should the parents take any measures?

On the one hand，people who spend a lot of time in front of the TV, especially teenagers，may snack more，and that may affect their long-term diet quality.

On the other hand，TV ads for fast food，sweets and snacks tempt teenagers to eat more of those foods. And TV time might also replace exercise time for some kids.

Lead researcher Dr. Daheia J. Barr-Anderson，of the University of Minnesota in Minneapolis，told Reuters Health a clear correlation between TV time during high school and diet quality in young adulthood. While the heaviest TV viewers were eating the most junk food , those who'd watched less than two hours per day had the highest intake(吸收)of fruits，vegetables, whole grains and high-calcium food. In her opinion，parents should limit and monitor TV viewing.

As far as I am concerned，children should watch no more than two hours of television per day. And parents should set a good example by eating right，being physically active and curbing their own TV time.

5．What's the best title for this passage?

A．People should keep away from TV to keep healthy.