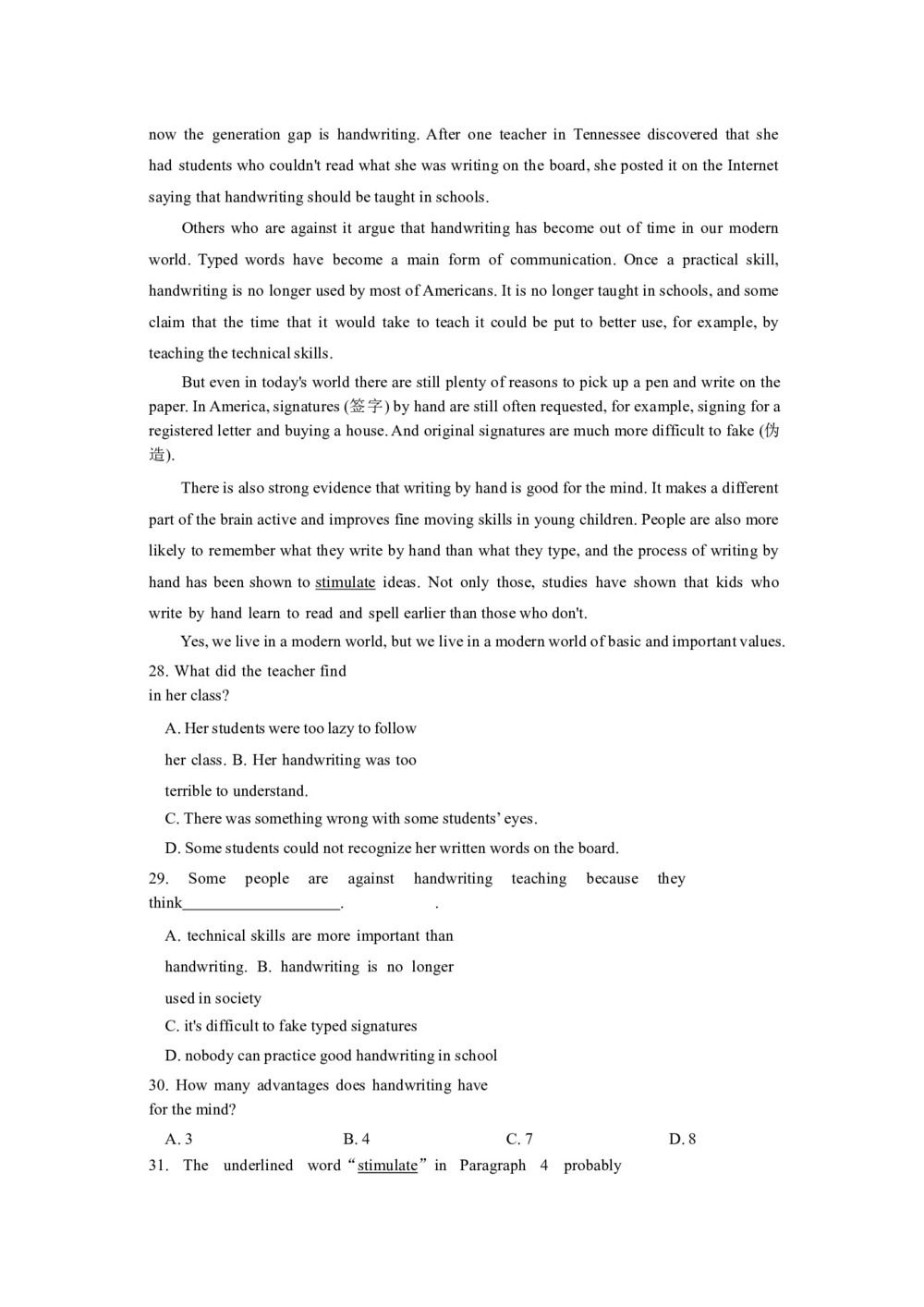 ﻿now the generation gap is handwriting. After one teacher in Tennessee discovered that she had students who couldn't read what she was writing on the board, she posted it on the Internet saying that handwriting should be taught in schools.

Others who are against it argue that handwriting has become out of time in our modern world. Typed words have become a main form of communication. Once a practical skill, handwriting is no longer used by most of Americans. It is no longer taught in schools, and some claim that the time that it would take to teach it could be put to better use, for example, by teaching the technical skills.

But even in today's world there are still plenty of reasons to pick up a pen and write on the paper. In America, signatures (签字) by hand are still often requested, for example, signing for a registered letter and buying a house. And original signatures are much more difficult to fake (伪造).

There is also strong evidence that writing by hand is good for the mind. It makes a different part of the brain active and improves fine moving skills in young children. People are also more likely to remember what they write by hand than what they type, and the process of writing by hand has been shown to stimulate ideas. Not only those, studies have shown that kids who write by hand learn to read and spell earlier than those who don't.

28. What did the teacher find in her class?

A. Her students were too lazy to follow her class. B. Her handwriting was too terrible to understand.

C. There was something wrong with some students' eyes.

D. Some students could not recognize her written words on the board.

29. Some people are against handwriting teaching because they think . .

A. technical skills are more important than handwriting. B. handwriting is no longer used in society

D. nobody can practice good handwriting in school

30. How many advantages does handwriting have for the mind?

A. cause B. collect C. exchange D. influence

Researchers at the University of Chicago have trained an artificial intelligence( 人工智能) system, to write fake( 伪 造 的 ) reviews( 评 论 ) on Yelp, a website showing customers reviews on shopping or something else, and it's pretty hard to tell them apart from a human review.

Their study, which will be presented at the ACM Conference on Computer and Communications Security in October, aimed to throw attention onto how easily these systems can write reviews like humans and how damaging they can become if they're not monitored properly.

Since many small businesses depend on online reviews to help grow and keep their reputation, a future where someone-like a rival or angry customer-could crazily fill their page with negative reviews written by a machine is pretty worrying.

And, according to the research team, the threat goes far beyond fake reviews on Yelp. "In general the threat is bigger," Ben Y. Zhao, one of the authors of the study, said. "I think the threat towards society is large and it really misleads users and shakes our belief in what is real and what is not. I think that' s going