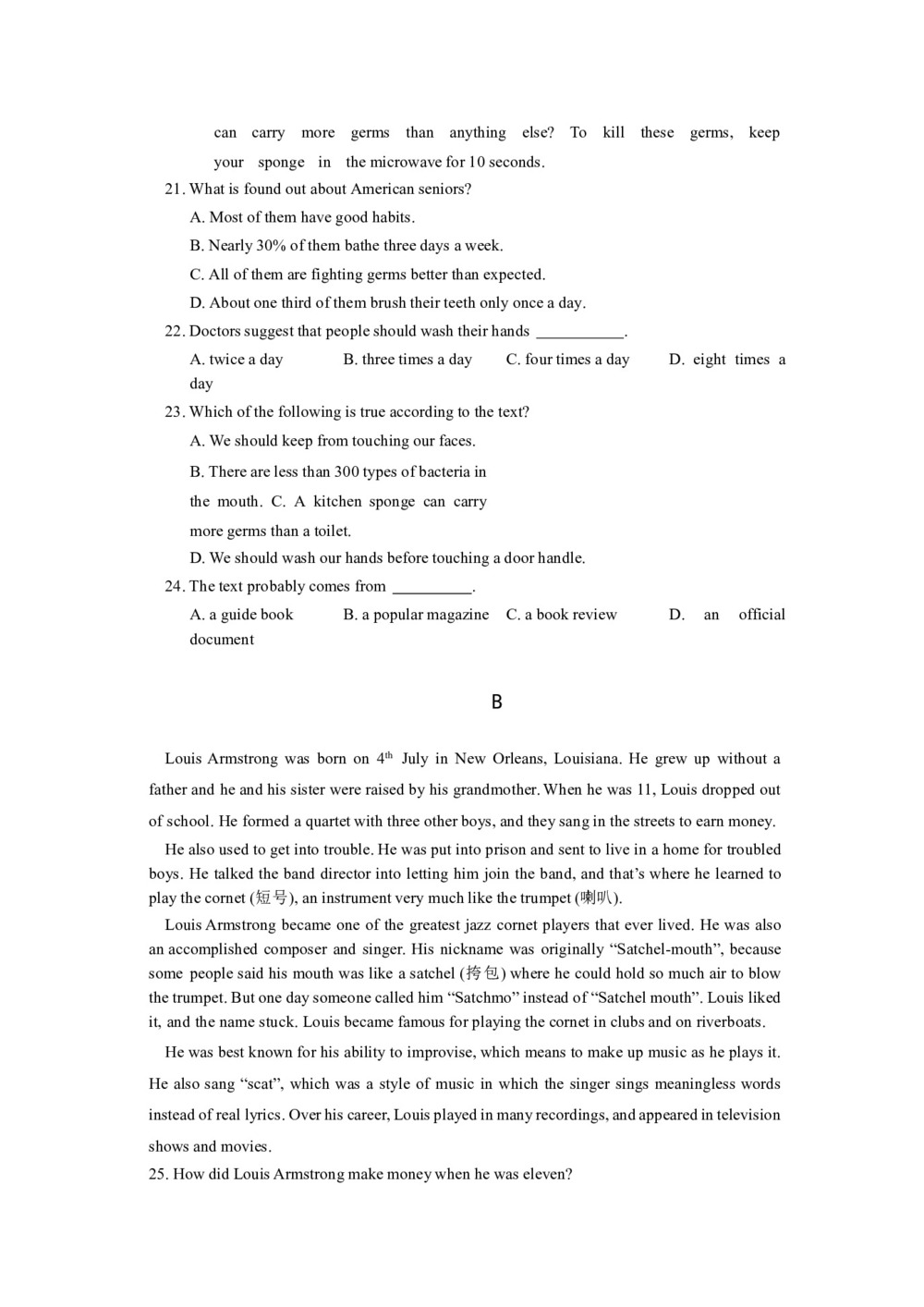 ﻿can carry more germs than anything else? To kill these germs, keep your sponge in the microwave for 10 seconds.

21. What is found out about American seniors?

A. Most of them have good habits.

C. All of them are fighting germs better than expected.

D. About one third of them brush their teeth only once a day.

22. Doctors suggest that people should wash their hands .

23. Which of the following is true according to the text?

A. We should keep from touching our faces.

B. There are less than 300 types of bacteria in the mouth. C. A kitchen sponge can carry more germs than a toilet.

D. We should wash our hands before touching a door handle.

24. The text probably comes from .

A. a guide book B. a popular magazine C. a book review D. an official document

Louis Armstrong was born on 4th July in New Orleans, Louisiana. He grew up without a father and he and his sister were raised by his grandmother. When he was 11, Louis dropped out of school. He formed a quartet with three other boys, and they sang in the streets to earn money.

He also used to get into trouble. He was put into prison and sent to live in a home for troubled boys. He talked the band director into letting him join the band, and that's where he learned to play the cornet (短号), an instrument very much like the trumpet (喇叭).

Louis Armstrong became one of the greatest jazz cornet players that ever lived. He was also an accomplished composer and singer. His nickname was originally "Satchel-mouth", because some people said his mouth was like a satchel (挎包) where he could hold so much air to blow the trumpet. But one day someone called him "Satchmo" instead of "Satchel mouth". Louis liked it, and the name stuck. Louis became famous for playing the cornet in clubs and on riverboats.

He was best known for his ability to improvise, which means to make up music as he plays it. He also sang "scat", which was a style of music in which the singer sings meaningless words instead of real lyrics. Over his career, Louis played in many recordings, and appeared in television shows and movies.

25. How did Louis Armstrong make money when he was eleven?

26. What kind of instrument did Louis Armstrong play?

27. After getting to know about Louis Armstrong, we can draw the conclusion that .

A. he was cleverer than other boys B. he was talented in music

C. he was good at making up music D. he was gifted with playing instruments.

When it comes to generation gap ( 代沟), we usually think of different tastes in music, or games. But