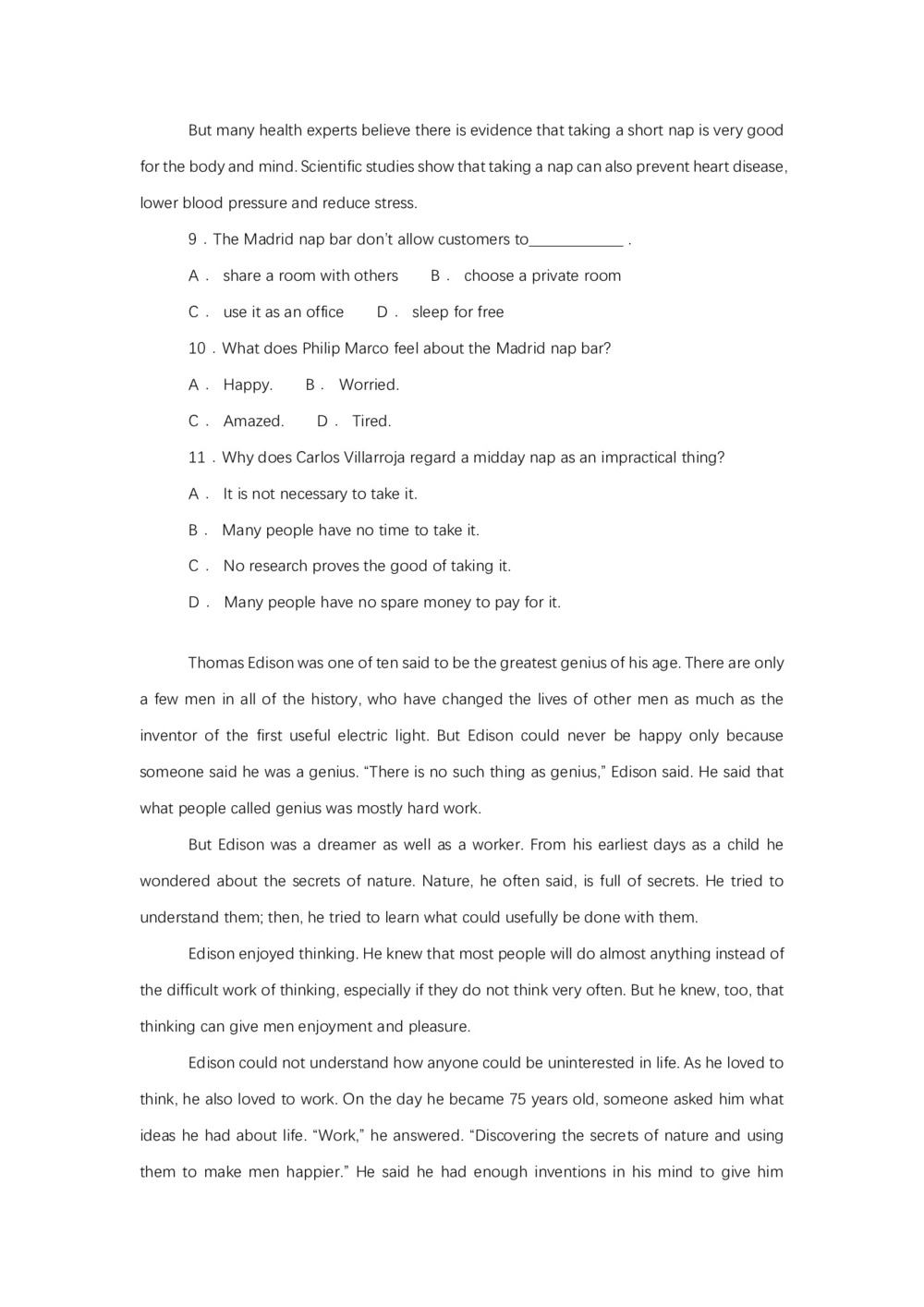 ﻿   But many health experts believe there is evidence that taking a short nap is very good for the body and mind. Scientific studies show that taking a nap can also prevent heart disease, lower blood pressure and reduce stress.

A． share a room with others B． choose a private room

C． use it as an office D． sleep for free

10．What does Philip Marco feel about the Madrid nap bar?

11．Why does Carlos Villarroja regard a midday nap as an impractical thing?

A． It is not necessary to take it.

B． Many people have no time to take it.

C． No research proves the good of taking it.

D． Many people have no spare money to pay for it.

Thomas Edison was one of ten said to be the greatest genius of his age. There are only a few men in all of the history, who have changed the lives of other men as much as the inventor of the first useful electric light. But Edison could never be happy only because someone said he was a genius. "There is no such thing as genius," Edison said. He said that what people called genius was mostly hard work.

But Edison was a dreamer as well as a worker. From his earliest days as a child he wondered about the secrets of nature. Nature, he often said, is full of secrets. He tried to understand them; then, he tried to learn what could usefully be done with them.

Edison enjoyed thinking. He knew that most people will do almost anything instead of the difficult work of thinking, especially if they do not think very often. But he knew, too, that thinking can give men enjoyment and pleasure.

Edison could not understand how anyone could be uninterested in life. As he loved to think, he also loved to work. On the day he became 75 years old, someone asked him what ideas he had about life. "Work," he answered. "Discovering the secrets of nature and using them to make men happier." He said he had enough inventions in his mind to give him another 100 years of work.

A． he could be happy if he was a genius

B． genius plays the most important part in one's success

C． hard work could do better than genius

D． genius could do better than hard work

D． there are few secrets for him to discover later

B． Edison made 100 inventions in his life

C． Edison was able to live and work for 100 years

Ways to Take Care of Your Books

What do you do to take care of the books in your library? Some collectors(收藏者) refuse to read the books in their collection; so the books remain in good condition. Others buy two copies of a book: they read one and leave the other untouched. However many readers must read their books but they still want to protect. 16．.

You may have been told to write in your books or even to underline words, phrases, and paragraphs. But if you plan to keep the book, add it to your library or even sell it - don't write in the book in ink. 17．. Use a notebook to take notes or use pieces of paper.

Food and drinks are things that may be dangerous to your books. 18．. If you need to read while you eat make sure your fingers are clean and dry as you hold the book or turn the pages.