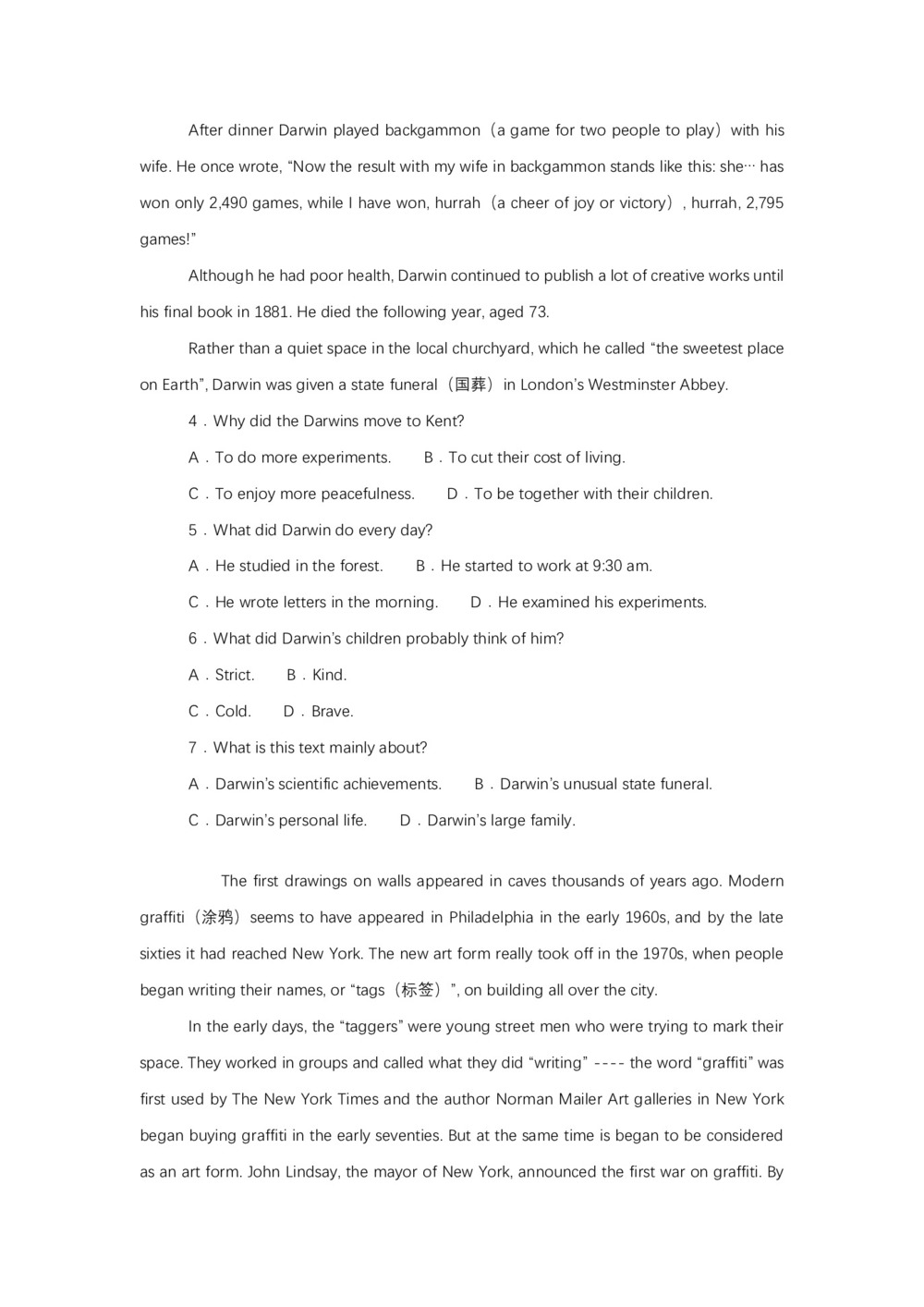 ﻿   After dinner Darwin played backgammon（a game for two people to play）with his wife. He once wrote, "Now the result with my wife in backgammon stands like this: she... has won only 2,490 games, while I have won, hurrah（a cheer of joy or victory）, hurrah, 2,795 games!"

Although he had poor health, Darwin continued to publish a lot of creative works until his final book in 1881. He died the following year, aged 73.

Rather than a quiet space in the local churchyard, which he called "the sweetest place on Earth", Darwin was given a state funeral（国葬）in London's Westminster Abbey.

4．Why did the Darwins move to Kent?

A．To do more experiments. B．To cut their cost of living.

C．To enjoy more peacefulness. D．To be together with their children.

5．What did Darwin do every day?

C．He wrote letters in the morning. D．He examined his experiments.

6．What did Darwin's children probably think of him?

7．What is this text mainly about?

The first drawings on walls appeared in caves thousands of years ago. Modern graffiti（涂鸦）seems to have appeared in Philadelphia in the early 1960s, and by the late sixties it had reached New York. The new art form really took off in the 1970s, when people began writing their names, or "tags（标签）", on building all over the city.

In the early days, the "taggers" were young street men who were trying to mark their space. They worked in groups and called what they did "writing" ---- the word "graffiti" was first used by The New York Times and the author Norman Mailer Art galleries in New York began buying graffiti in the early seventies. But at the same time is began to be considered as an art form. John Lindsay, the mayor of New York, announced the first war on graffiti. By the 1980s it became much harder to write on subway trains without being caught and instead many of the graffiti artists began using roofs of buildings.

The argument over whether graffiti is art is still going on. Peter Vallone, a New York City Councilor thinks that graffiti done with permission（许可）can be art, but if it is on someone else's buildings it become a crime （犯罪）. On the other hand, Felix, a member of the Berlin-based group Reclaim Your City, says that graffiti shows freedom and makes cities livelier.

Graffiti is now sometimes big business. The Frenchman Blek le Rat and the British artist Banksy have become internationally famous by producing works which often make humorous points. Works by Banksy have been sold for over $100,000.

8．When did graffiti really take off?

9．Who created the word "graffiti"?

C．A newspaper and a writer. D．The mayor of New York.

10．How did things change after the first war on graffiti?

A．It can be beautiful when it's done by a skilled artist.

B．It is a crime if the artist doesn't have permission.

D．It is far from being considered art.

Everybody knows how important it is for students to get a good night's sleep every night. They aren't able to do their best unless they sleep well. Most experts agree that the proper number of hours is eight, and this has been accepted as common sense（常识）for as long as I can remember. However, I was young once and I know that most of you get much less sleep than that - and sometimes this affects your schoolwork.

I read an article in a teachers' magazine recently. They did a research of 848 students in Wales. Worryingly, the results suggested that teenagers are facing a new problem. They may go to bed and get up at proper times but a growing number wake up in the middle of the night, not to use the bathroom or have a snack（点心）but because of FOMO - the fear of missing out!